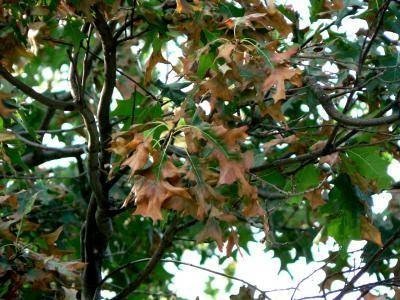 Bacterial leaf scorch is sometimes abbreviated as BLS and can also be referred to as marginal leaf burn. This issue affects plants and trees across the country, including in Austin. It is essentially when leaf tissue dies around the edges and can have several different causes.

Because there are several potential reasons that leaf scorch can occur, an arborist will have to tell you the exact reason. It can happen when the soil doesn’t have enough moisture or if the leaves lose water too quickly and can’t replace it adequately. It is also possible that the roots of the tree were killed by compaction, excavation, or plant pathogens, meaning the leaves can’t receive enough water. The lack of water that results in bacterial leaf scorch can also be caused by bacteria or fungi invading the tree and then plugging the xylem, the vessels responsible for carrying water. Essentially, leaf scorch happens when the leaves of a plant don’t get enough water, but the reason for this lack of water can vary. The last of these is bacterial leaf scorch since it is transmitted by bacteria.

Common Bacteria That Cause BLS

Among the various bacteria that can clog the xylem of a tree and lead to bacterial leaf scorch, Xylella fastidiosa is among the most common. This particular bacterium has been linked to leaf scorch an incredible range of plants, including sweetgum, red maple, sycamore, elm, oak, and mulberry trees. It can also cause a different issue, Pierce’s disease, on grapevines or other problems like ragweed stunt, almond leaf scorch, periwinkle wilt, plum leaf scald, phony peach disease, and alfalfa dwarf.

In the case of bacterial leaf scorch due to bacteria like Xylella, it will spread as this bacterium moves between plants. It can be carried by spittlebugs, leafhoppers, and treehoppers of all ages. The bacteria will either transmit immediately or wait about two hours to do so. The insect keeps carrying the bacteria, meaning it can spread it to multiple plants.

When it affects red maple trees, bacterial leaf scorch will typically affect individual branches, with the number of them affected increasing every year. The leaves will look normal during the early portion of the season before leaf discoloration starts along the edges. By mid or late July, the discoloration will have reached the base and midrib of the leaf. In many cases, you will notice a border of dark reddish brown around the light brown area of dead tissue. A yellow halo separates this dead tissue from the healthy green tissue.

It is likely that red maples with BLS will experience premature defoliation starting in late August. Trees with this condition are also at a higher risk of damage due to stress.

Like red maple trees, the leaves on elm trees affected by bacterial leaf scorch will have a yellow border that keeps the green tissue and dead tissue separated. The scorching on these trees tends to start at the base of the tree before moving upward. Elm trees with BLS have a higher risk of elm bark beetles and Dutch elm disease.

Most of the time, red and pin oaks will develop bacterial leaf scorch and the other varieties of oak won’t, but white oak can also be affected. You once again get the distinctive yellow separation on the leaves and the scorch spreads closer to the leaf’s base with an undulating pattern over time. Red oaks are unlikely to suffer from defoliation due to bacterial leaf scorch, but red oaks may develop water sprouts.

Most trees with bacterial leaf scorch will have the same pattern on their leaves, with the margins turning brown first. The disease tends to affect the oldest leaves first and the yellow border nearly always separates healthy and dead leaf tissue. In some cases, browned leaves will fall out. The symptoms of bacterial leaf scorch get worse over the course of three or eight years and by the end of this time, the entire tree will begin browning prematurely.

Confirming It Is BLS

Only an expert will be able to confirm that the leaf scorch affecting your tree is of a bacterial nature and whether it is caused by Xylella or another bacterium. They will need to conduct laboratory tests or send a sample to a third-party lab for testing. During the testing, experts can recognize Xylella by its lack of flagella and spore, thick rippled cell wall, and lack of growth on the conventional media used for bacteriology.

Your arborist or other tree expert will be able to work with you to create a plan to eliminate bacterial leaf scorch. Luckily, the bacteria typically require several years to kill a tree completely, giving you plenty of opportunity to take care of it. That being said, it can be complicated to treat bacterial leaf scorch because even if you get rid of the infected trees, the bacteria may have spread to the others nearby.

At the moment, the most effective treatment is an antibiotic known as tetracycline. Arborists inject this into the infected tree and the symptoms will temporarily go away completely or at least be reduced for about a year. The symptoms eventually reappear though. You can also limit the spread of the bacteria and resulting leaf scorch by removing dead branches and disinfecting your pruning tools between every cut.