What Causes Conks And Mushrooms On Trees 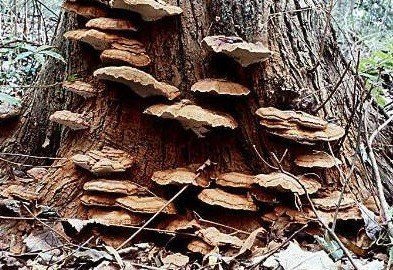 When mushrooms or conks, also called a bract or shelf, grow on tree bark, it is usually a sign that the tree is infected with a rot-inducing pathogen. While not all mushrooms are harmful to trees, many are. They cause heart decay, which causes healthy trees to begin to rot at the heart of the trunk.

These fungi enter the tree at wound areas, which are caused by improper pruning, lightning strikes, windstorms, fire, construction, or other means of tree damage. The decay fungi will reproduce through fruiting bodies, or conks, that develop in old wounds, cracks in the bark, or old branch stubs. These fruiting bodies produce spores that are spread to other trees by means of animals, insects, water, or wind. These spores find a new home in a tree wound, thereby spreading the fungi all around.

There are several kinds of heart rot that include white rot, brown rot, soft rot, and varnish rot. Some are more damaging to the tree, some are less. Preventing tree wounds is the best defense against any of the various heart rots infecting your trees.

The organisms that cause white rot break down the lignin and cellulose in the wood, causing it to feel soft and stringy, moist and spongy. The wood appears white or yellow. The split-gill mushroom causes white rot in more than 75 different trees. These include pine, fir, spruce, sequoia, acacia, ash, locust, willow, magnolia, birch, ash, laurel, oak oleander, and poplar. A white and brown shelf mushroom known as artist’s conk, infects citrus trees as well as pine, fir, maple, elm, and poplar.

A bright-red conk known as varnish fungus can kill landscape and fruit trees within three to five years. Susceptible trees include pine, fir, poplar, and willow, apple, cherry, peach, and citrus. The rate of decay is rapid on oak and maple trees. The conks grow up to 14 inches wide and have a varnish-like coating on the top. They usually appear in summer at the base of a tree.

Oyster mushrooms cause a white, flaky rot in a number of trees that include spruce, fir, holly, tulip tree, willow, maple, pecan, walnut, persimmon, chestnut, eucalyptus, hackberry, alder, beech, acacia, linden, magnolia, oak, poplar, ash, birch, and willow. A shelf-like mushroom, the oyster mushroom grows from two to eight inches across and is smooth on top with gills on the underside.

Also called dry rot, brown rot is caused by fungi that feed on the cellulose and hemicellulose, leaving the brownish-colored lignin behind. Brown rot attacks dry wood, leaving it crumbling into cubes, due to the transverse and longitudinal cracks in the wood. A single column of rot is formed through the wood. The brown rot mushrooms are faster-growing that the white rots mushrooms are, and are more destructive.

Sulfur mushrooms are orange-yellow on the top and red-orange on the bottom when they are young. As they age they turn white. They go after a large number of trees that include the eucalyptus, maple, poplar, oak, walnut, yew, chestnut, birch, ash, pine, spruce, and cherry. The sulfur mushroom fungus is one of the most serious causes of decay in oaks and one of very few fungi that attacks yew trees. They grow from two to 12 inches wide and are soft and moist.

A reddish-brown, thick beefsteak fungus causes severe brown rot in older oak, chestnut, and other hardwoods.The red-banded polypore can vary in appearance, but it usually has a red band at the bottom edge of the conk. Its favorite targets are the coniferous trees.

Both fungi and bacteria cause soft rot. They attack the cellulose, the hemicellulouse, and the lignin, but only in areas in close proximity to their growth. Soft rots grow more slowly than do the white or brown rots.

Fungi are spread via airborne spores that attach themselves to areas of old wounds or injuries. Tree wounds can be caused by fire, ice, uncared for pruning, broken branches, lightning, or boring insects.

When tree bark is stripped off mycelia, the vegetative part of fungi, they are there between the wood and bark of roots and the part of the trunk that is below the soil line. After the winter rains, mushrooms form at the base of the afflicted tree under the soil. They grow most rapidly under wet conditions, but will not grow in dry areas. Sometimes just removing the damp dirt from around the bottom of the tree and allowing it to dry out can slow or even stop the decay.

Identification Of The Tree Fungi

Many of the above-mentioned fungi can be identified by their particular color, shape, and texture of the conks that form on the trees. These fruiting bodies, are often found around wounds, scars, or around the root crown. A few of these mushrooms are edible, including the oyster mushroom and the golden-brown honey mushroom. Just be very certain of the identity of any mushroom you eat, as some can cause illness or even death.

Treatment of Mushrooms and Conks

There is not a whole lot that a person can do once the spores make their home in a tree. Generally, they will attack older trees or trees that have been damaged in some way. If the mushroom is growing on a branch, you can cut the branch off. When you do, be sure to leave a collar around the wound. Never leave a stub.

Danger Of Trees Falling Due To Fungus

Trees that have been infected with heart rot by these fungi become weakened—especially those infected with brown rot. A hard wind, especially one that follows many days of rain, can topple a rot-weakened tree. Of course this is a danger to anyone or anything in its path. If you know that you have a tree that has been weakened by rot, you should either have it professionally removed, or secure it in some way with braces or cables.

If you have any questions, or need the help of a professional arborist, please give us a call.